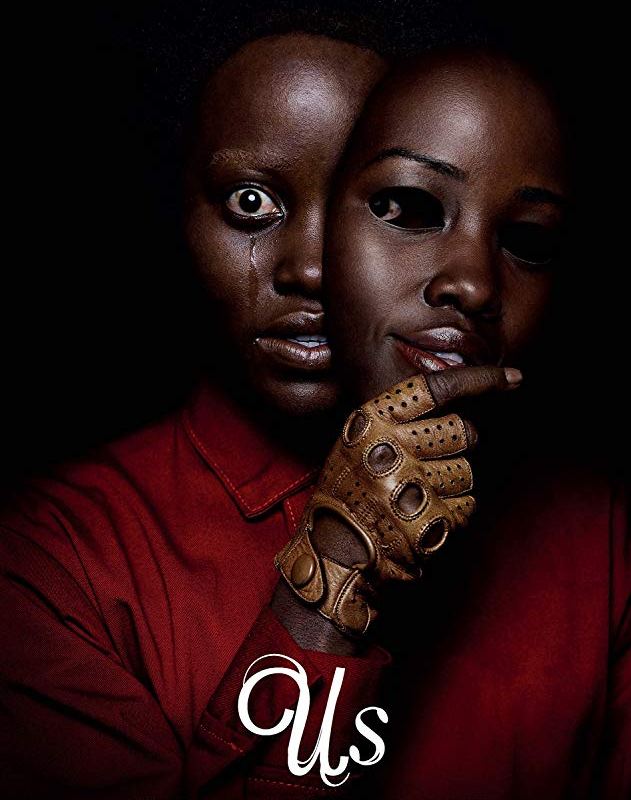 Written and directed by Jordan Peele, and starring Lupita Nyong’o and Winston Duke, the highly anticipated “Us” (I saw it nearly two weeks ago. Apologies for the delay in posting) has finally arrived. You’ve probably seen a trailer or already read or heard what it’s about, but I don’t think the plot should be laid out until you see it (if you care to) – but I can still critique it without giving too much away.

The acting is good. Lupita plays her dual roles well but the evil one is stronger. I mean, it’s definitely the more interesting one. But, is it? Winston Duke provides comic relief as Adelaide’s clueless, nerdy, big for no reason, rendered nearly useless early on, husband. Shahadi Wright Joseph does a notable job. That young lady has one of the most authentic and laughable eye rolls I’ve seen in a good long time.

The writing is uneven at times, as some of the action, imagery and symbolism is outstanding, and some is… how should I put it? Not. The images of Lupita fighting/hunting a version of herself to the death to save her self/family/humanity while wearing shiny gold chains/bracelets/shackles/handcuffs – depending on your interpretation, is nothing short of dazzling.

There is some exceptional foreshadowing used in many instances that provide clues that one will only grasp onto in hindsight. In this way, the story is unpredictable, but in other ways it is textbook predictable. The purposeful way the audience is frustrated by that foreshadowing – either because certain characters should or should not have done certain things or the way they did them – all makes sense in the end. In this way, “Us” is a movie that may make you think. Not about anything profound exactly, but more about how well the script is structured. The ending is tied up brilliantly and a quality “lightbulb” moment is provided, but by the time I got there the movie had already been too muddled for that important moment to pack the punch that it should have.

This socially conscious Invasion of the Body Snatcher’s (+meets any horror movie where a family/class/group of any sort takes a vacation and/or road trip) remix is great, if that is exactly how one views “Us.” Otherwise, it’s sort of a mess. This movie becomes its own worst enemy as it gets bogged down in a tangle of messaging, metaphors and symbolism that led to me to care less about the intended meaning of the story. I understood the commentary, messages, etc., I just couldn’t find myself caring about them. Maybe that says more about me than it does about this movie, but the execution of it all just didn’t pull me in.

I came here for horror. And I got some. But I also got a lot of other “extra” stuff I just wasn’t interested in. I literally, physically, had to fight myself not to walk out after an hour and a half. The movie “only” had 26 more minutes and that 26 minutes felt like an eternity! I know I shouldn’t compare movies, but here I go anyway: In comparison to the clear-cut narrative of Get Out (my review in the link) where I was on the edge of my seat waiting to see what would happen next and fully invested as if I knew those characters personally, the narrative of “Us” is the “un-clear cut” opposite. And that would be okay if rather than finding the depth/density/gymnastics of this story telling entertaining, I found it rather tedious. “Us” feels unnecessarily complicated. Sometimes less is more. This is one of those times.

I’m proud of anyone who gets their movie made and Peele told his story, his way. I’m happy Lupita got a headlining role which she carried well. All those bunnies and not a drop of rabbit poop on the floor was quite impressive.

Alas, you know how it goes. Everything is subjective. You may like “Us” more than I did. I’ve heard the word “masterpiece” thrown about, and while I disagree, it will be a very long time (at least until it streams) before I give “Us” a second watch to confirm my first impression. To each his own, different strokes, blah, blah, blah, so on and so on, and whatever.

“Us” earned 6 out of 10 bloops because I do believe it is “good” but could have been better, but there is something masterful in the intricacy of the story telling that brings it up to 7 bloops. So I guess that averages out to 6.5 bloops in the end. It isn’t perfect, and has quite a few great, positive qualities. It just didn’t come together for me. I may have been pulled in for a minute or two, here and there, but I was never fully invested nor transported out of my seat into the action. I was just another woman in a theater watching a movie.