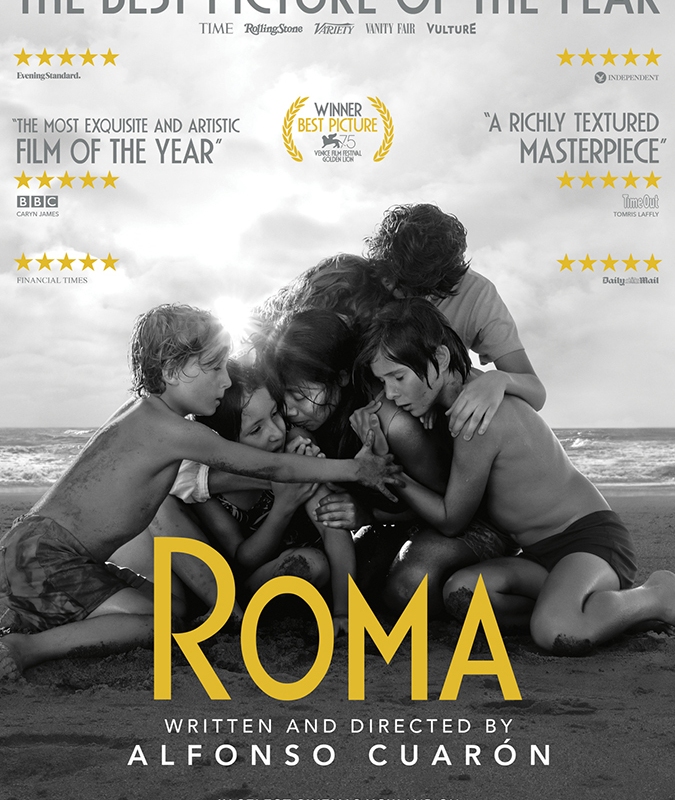 Written, directed, shot and edited by Alfonso Cuarón, and starring Yalitza Aparicio as Cleo, Roma tells the story of a middle class family and their maid Cleo (who is considered a member of the family and the star of the movie), in early 1970’s Mexico. It is a story about two women who take great care of one another when others fail to do so, and take the utmost care of one another’s children.

Roma is beautifully shot in black & white. The look of it is lovely. Some shots are stunning. The directing is tight, the editing is fine. The locations, set design and wardrobe are great.

All I know is this… the story is good, but it takes foreeeeeeever to get to the friggin’ point! I have to give myself a pat on the back because I watched while lying on the couch and didn’t fall asleep! I wanted to quite desperately, but I hung in there until something actually happened!!!! I tell you, the struggle was real. I wish I could say whether I would have struggled less sitting in a theater, but who knows?

Seriously. Nothing happens for the first hour and, ooh, maybe, 38 minutes. And I have to say, I wasn’t initially sure if the pay-off was worth the pain.

The above comments were my first thoughts about Roma before I gave it some extra thought. I saw Aparicio give an interview where I learned this was her first acting role and Cuarón give an interview where he talked about the movie being based on his mother and her maid. (Although, if my mother drove a car like his mother, I wouldn’t be so quick to claim her.) Then, how I felt about the film improved greatly. I sought out more information because I suspected I had missed something with this film, and I had. So, now that you know what you need to know about this movie going in, and there are no spoilers, so far (at least I don’t think there are), you can enjoy it more than I did upon first watch. And the first hour and a half is still bloody slow, but after reading and thinking about it, I now see that there is a method to it all.

Warning: The next bit may contain spoilers

This movie triggered the hell out of me as someone who has suffered the very same tragedy as Cleo, under quite similar circumstances and with some of the same feelings about it all. I accepted it as part of my life plan and moved on. Sometimes what may feel like the most terrible thing in the world that could happen is life, or God or the universe or whatever you want to call it, doing you a great favor. I think this is how Cleo felt, except she felt guilty about her feelings. I did not.

I had no idea what Roma was about going in so it delivered me a real punch in the gut. That was not where I was expecting the story to go. If Roma does nothing else, it captures the immediate emptiness, confusion, and distress that can accompany such an event, and it does so realistically, beautifully, painfully and flawlessly.

Aparicio’s acting is so perfectly suited for this role. During a portion in Cuarón’s interview (hyperlinked above), I believe, where he talks about how long the casting took because he needed to find the perfect person who “felt” like Cleo. This woman is powerless and merely existing while life happens all around her and to her, over and over again, and she wades through the weight of it while emotionlessly floating through it at the same time; accepting her fate, until she surrenders to the powerlessness and in a way, sets herself free. When I tell you it’s brilliant, it is brilliant. (Any time I start using the “b” word, you know I’m into the “Singing Praises” phase of a review.)

Then there is the mother’s story… Although she has a lovely home, money, a husband and children – all these things Cleo does not have – her life parallels Cleo’s – showing that class/status and/or money does not immunize one from unhappiness, misfortune, misery or depression. Again, brilliant!

And while the women’s stories are comparable, so too are the stories of the men in their lives. Each man is selfish, “macho” in his own way, cowardly in one way or another, abusive, dismissive. Again, brilliant!

The last 40 minutes or so of Roma earned 10 out of 10 bloops! That hospital scene transported me from being a woman watching a movie to one semi-sad day 35 years ago in an instant. The end was incredibly moving as well.

Cuarón earned 10 out of 10 bloops for pouring all of his artistic passions into this project. You can see and feel the care in the details of this film.

Roma as a whole, earned 9.75 out of 10 bloops. It is a gut wrenching piece of work about the human condition but I had to take away from the mastery of it all because I had to do extra research to get to the 10 of it all. I didn’t think I would be able to forgive the slow drag that was that first hour and a half of a 2 hour 15 minute movie, but after thinking about it, that old light bulb finally went off and I’m over it! I get it! While I watched, thinking I was bored, Cuarón was intentionally messing with my mind. Many things happened! I was overly focused on Cleo’s floating and not focused enough on the events that were happening to her and around her and seeing those events not through my own eyes, but through the eyes of Cleo! All the work and the beauty and the care that Cuarón put into this project makes it masterful. And what seals it for me is I want to see it again. I might even know someone I may drag to see it so I can see what they think.

Roma is not going to be everyone’s cup of tea, but it has already won two Golden Globes, so at least I know it’s not just me who enjoyed it. Good for you, Señor Cuarón and good for Yalitza Aparicio who is living her best life after being plucked from a humble Mexican town to become a leading lady with Oscar buzz and the cover of Vogue! I am here for and loving every minute of all of it!

What I’m Seeing Next

If Beale Street Could Talk will be reviewed next. I saw it weeks ago and is one of the more difficult reviews (the opposite of Mary Poppins Returns) that I’ve ever had to write. But I’m almost there.

Mary Queen of Scots
Widows
The Favourite
Green Book
Halloween
Nobody’s Fool
Bohemian Rhapsody
Beautiful Boy
The Hate U Give
First Man
Assassination Nation
The Oath
A Star is Born
The House with a Clock in Its Walls
A Simple Favor
The Predator
BlackkKlansman
Support the Girls
Peppermint
Christopher Robin
Crazy Rich Asians
The Happytime Murders
RBG
Won’t You Be My Neighbor
Sorry to Bother You
Superfly
Hereditary
Book Club
Avengers: Infinity War
You Were Never Really Here
Rampage
A Quiet Place
Ready Player One
A Wrinkle in Time
Lady Bird
I, Tonya
The Florida Project
Black Panther
Molly’s Game
The Post
Phantom Thread
Den of Thieves
All the Money in the World
Coco
The Greatest Showman
The Disaster Artist
Call Me By Your Name
Three Billboards outside Ebbing, Missouri
The Shape of Water
Marshall
The Man Who Invented Christmas
Victoria and Abdul
Thor: Ragnarok
Kingsman: The Golden Circle
Mother!
It
Good Time
Atomic Blonde
Dunkirk
Girls Trip
Spider-Man: Homecoming
The Big Sick
Baby Driver
All Eyez on Me
It Comes at Night
The Wedding Plan
Wonder Woman
Everything, everything
King Arthur: Legend of the Sword
Raw
Kong: Skull Island
Logan
The Girl with All the Gifts
A Cure for Wellness
Get Out
Hidden Figures
Fences
Moonlight
Hell or High Water
Loving
La La Land
Lion
Manchester by the Sea
Arrival
Hacksaw Ridge
Nocturnal Animals
Captain Fantastic
Elle
Jackie
I Am Not Your Negro
The Lobster