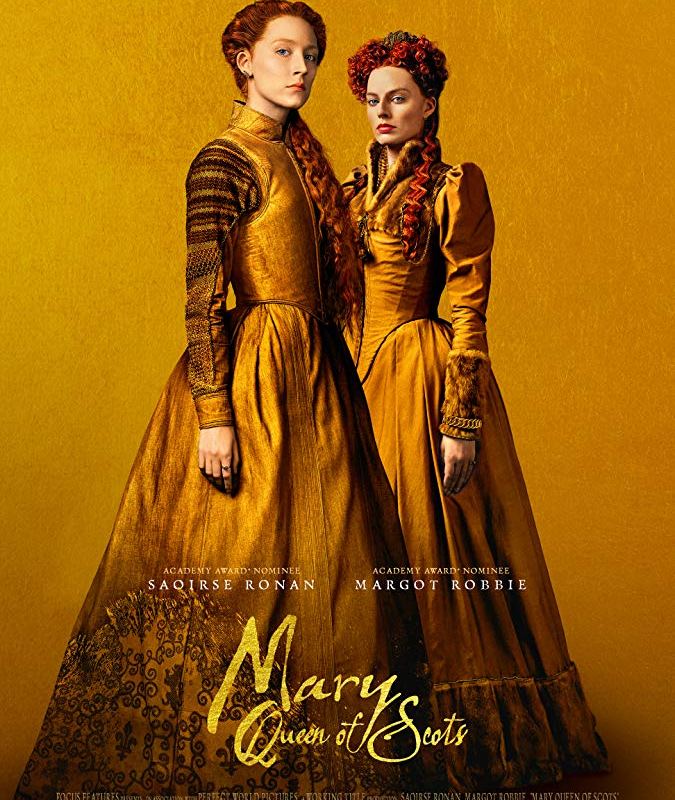 Directed by Josie Rourke, based on British historian and biographer John Guy’s Queen of Scots: The True Life of Mary Stuart (2005) and starring Saoirse Ronan and Margot Robbie, Mary Queen of Scots is about, well… Mary, Queen of Scots – and how plotting to claim the throne from her cousin, Queen Elizabeth, led to her inevitable demise.

The thing that strikes me most about this movie is just how brutal these royals were to one another. Talk about your dysfunctional families! Why would anyone expect their reigns not to have been vicious considering how they lived to maintain all that they had in their personal lives. They killed their family members all in the name of power and position. Absolute power corrupts absolutely. Watching the use of religion to control, rile, calm, appease, the masses was impressive. Also watching this movie and reading up on the history of the European rule in order to write this review made clear so many of the reasons why we are where we are today. It’s a shame humans have such a great capacity to learn and the ability to adapt to changes in societal norms but resist that change with all our might at times. All because those in power don’t want to give not even a morsel of it up. The rest of us are just playing in their clubhouse. I guess that’s another discussion for another time. Let’s get into this movie.

From what I’ve read, some people are up in arms at the idea of Mary having had a Scottish accent when she was in fact raised in France. Those same people should know by now, Hollywood is funny that way when they favor an actress as they favor Ronan. This is a matter of poetic license, which at times purposefully ignores and disposes of historical accuracy. And why? Oh yeah, so Saoirse Ronan can star in it so theaters will have butts in seats. As for me, if I don’t mind the diverse cast featuring an Asian woman, a brown man and Adrian Lester, which I’m pretty sure probably isn’t totally historically accurate either, I won’t split hairs about who spoke using which accent/dialect. It’s a movie, not a documentary.

Ronan does a good job here with a lot of dialogue. I really kind of wanted her to just please stop talking at some point (I suppose Queen Elizabeth felt the same way and finally shut her up.), but she carries the movie well. What an arrogant woman Mary was. I guess she lived and died in her truth, for whatever that was worth. Margot Robbie’s skills are overshadowed by hair, makeup and wardrobe. It was almost as though she were a mannequin used to show them all off and there could have been any number of actresses underneath it all. They overpaid to have Robbie in this movie. Since the focus is on Mary, anyone could have been given the part. (Maybe the studio wasn’t so confident in Saoirse’s ability to put butts in seats on her own after all.) Those departments, by the way, hair, makeup and wardrobe, did a superb job, along with the beautiful camera work and set design. The set design told the entire story of the contrasts between these two women. Their homes and furnishings, clothes and makeup create a wonderful visual contrast.

Mary Queen of Scots earned 7.5 out of 10 bloops. It’s a good movie but I would stop short of calling it great. I don’t think I’ll be stopping strangers in the streets to tell them they must see this movie. (I’ve done this before.)

Although the two are comparable, I usually don’t compare films (at least I try not to if it can be helped. It’s not my fault two period pieces featuring women leads came out within weeks of one another during awards season). I must say, I definitely preferred The Favourite (my review in the link) because the screenplay really provided a vehicle for some whimsical, energetic, enjoyable, serious, acting.

What I’m Seeing Next

If Beale Street Could Talk will probably be next.

Widows
The Favourite
Green Book
Halloween
Nobody’s Fool
Bohemian Rhapsody
Beautiful Boy
The Hate U Give
First Man
Assassination Nation
The Oath
A Star is Born
The House with a Clock in Its Walls
A Simple Favor
The Predator
BlackkKlansman
Support the Girls
Peppermint
Christopher Robin
Crazy Rich Asians
The Happytime Murders
RBG
Won’t You Be My Neighbor
Sorry to Bother You
Superfly
Hereditary
Book Club
Avengers: Infinity War
You Were Never Really Here
Rampage
A Quiet Place
Ready Player One
A Wrinkle in Time
Lady Bird
I, Tonya
The Florida Project
Black Panther
Molly’s Game
The Post
Phantom Thread
Den of Thieves
All the Money in the World
Coco
The Greatest Showman
The Disaster Artist
Call Me By Your Name
Three Billboards outside Ebbing, Missouri
The Shape of Water
Marshall
The Man Who Invented Christmas
Victoria and Abdul
Thor: Ragnarok
Kingsman: The Golden Circle
Mother!
It
Good Time
Atomic Blonde
Dunkirk
Girls Trip
Spider-Man: Homecoming
The Big Sick
Baby Driver
All Eyez on Me
It Comes at Night
The Wedding Plan
Wonder Woman
Everything, everything
King Arthur: Legend of the Sword
Raw
Kong: Skull Island
Logan
The Girl with All the Gifts
A Cure for Wellness
Get Out
Hidden Figures
Fences
Moonlight
Hell or High Water
Loving
La La Land
Lion
Manchester by the Sea
Arrival
Hacksaw Ridge
Nocturnal Animals
Captain Fantastic
Elle
Jackie
I Am Not Your Negro
The Lobster