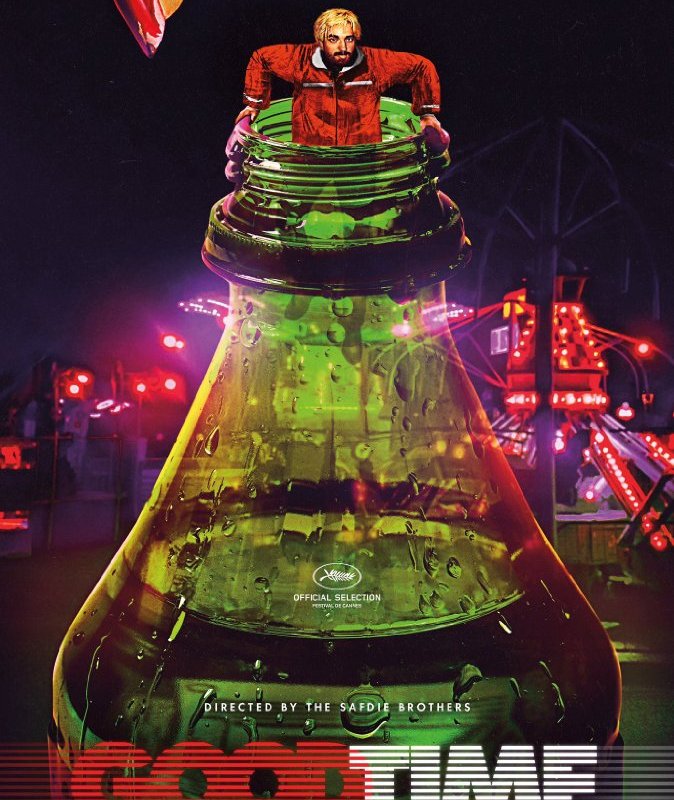 Co-written and directed by brothers Josh and Benny Safdie and starring Robert Pattinson, Good Time is a high energy story of extremely misguided brotherly love.  The  two brothers (Pattinson and B. Safdie) rob a bank and consequently wind up running from the law.  The robbery is well planned down to the last detail (almost) and goes awry.  The aftermath is unplanned and chaotic and with every desperate decision these characters are buried deeper and deeper into a not-so-good time.

Benny and Josh directed and they did a solid job.  They took good care of their project. This use of locations here is most impressive.  I enjoy watching movies that use location as a moving character in story telling in this way.  The characters are on the run and we get a chance to run with them – all over Queens.

Josh Safdie also co-wrote the movie and starred in Good Time.  The writing is strong as we wind through this dark story with these characters you find somewhat difficult to cheer for because they are so twisted and irredeemable.  Still, in a way, they are somewhat “likeable” outcasts, and you sort of wish them well (or at least I did); even though the consequences of their actions dictate that all will not end well. It’s an adventure with comedy, tragedy and some silliness. There’s quite a bit of violence in the form of pummeling that some may find off-putting, so proceed with caution.  The only problem I had with the story was that along the way, Pattinson and his brother have to rely on the kindness of a stranger and some lady he didn’t know let him and his brother into her house. At night. With a 16 year old in the house. I’m sure there is some nice lady who would do this somewhere, but not I.  Never.  The improbable act helps move the movie along in a clever way and allows important characters to be introduced, so I minded it a bit less.  But still, the New Yawka in me won’t let it go, Yo.

Josh Safdie did a good job with the subtlety of his acting.  His character is retarded (I use the word retarded because the character is actually obviously “slow” and there is no diagnosis(es) offered, although I’m sure he has one and that it is probably quite complicated – so don’t even try to come for me). Jennifer Jason Leigh plays a notable, super hilarious part in the mischief. Robert Pattinson is simply great here. He is growing as an actor in all the right ways.  His character was manipulative, narcissistic, single minded, self-centered, and I believed every word he said (or at least I believe that he believed it) and everything he did. Pattinson’s acting and this character are what makes this movie enjoyable to watch because he is a man operating with no plan at all, relying on his “wits” and you’ll want to see what he does next and the clever ways he extricates himself from some very tight spots (or not).

Good Time earned 7.5 out of 10 bloops. It’s a well written, well acted, good movie worth seeing.  It’s better than good, but I would stop short at saying it is great simply because it’s not a movie that I, personally, would want to run out and see again right away. As enjoyable as Good Time is, I don’t know that I can recommend venturing forth and seeing it in a theater.  It is definitely one of those films that is not for everybody. As is always the case with any movie, it depends on what you like. If you like a “bro” movie with much pummeling, dark humor and a balance between action and storytelling, you should enjoy this.  If not, don’t bother.

Thank you for reading. You can scroll down, enter your email address, and never miss a review!

What I’m seeing this week…

Mother!
It
Atomic Blonde
Dunkirk
Girls Trip
Spider-Man: Homecoming
The Big Sick
Baby Driver
All Eyez on Me
It Comes at Night
The Wedding Plan
Wonder Woman
Everything, everything
King Arthur: Legend of the Sword
Raw
Kong: Skull Island
Logan
The Girl with All the Gifts
A Cure for Wellness
Get Out
Hidden Figures
Fences
Moonlight
Hell or High Water
Loving
La La Land
Lion
Manchester by the Sea
Arrival
Hacksaw Ridge
Nocturnal Animals
Captain Fantastic
Elle
Jackie
Florence Foster Jenkins
I Am Not Your Negro