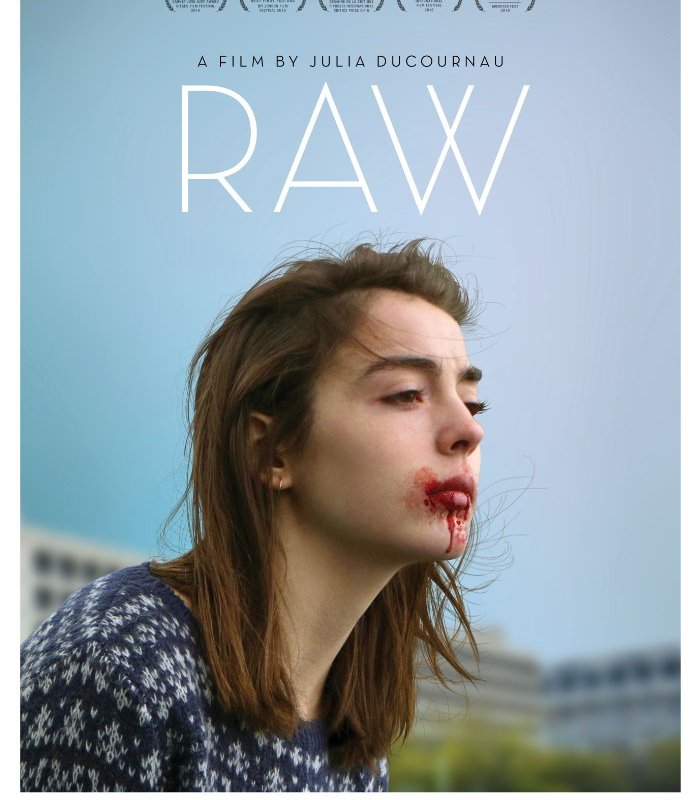 Raw, starring Garance Marillier and Ella Rumpf is a French drama/horror film written and directed by Julia Ducournau.  A young girl from a family of vegetarians enters university and acquires a “taste” for blood and flesh following a freshman class hazing ritual.  The premise expounds on parents’ worst fears as they send their little darlings off to college.  Some young adults may have mental or emotional break downs, party too hard, do something dangerous, stupid or life threatening, etc. in their first year of college.  No doubt there will be some growing pains.  This girl figures out she kinda likes the taste of warm, bloody, uuuuuuh, human.  Now that is a problem.

Marillier and Rumpf do an outstanding job as sisters who keep things from one another while simultaneously sharing secrets.  They are two very different people whose sisterhood runs deep despite their inability to get along and the glaring differences in their personalities.  The supporting cast is excellent all the way around.

Raw is thoughtfully written.  The story holds your interest.  I don’t know about you, but I’ve never seen a cannibal horror movie like this that I can think of (Silence of the Lambs is a very different type of film).  One of the many interesting things about Raw is that on one hand the story seems extremely far-fetched, but on the other hand it also almost seems like something that could, sort of, absolutely, really happen.  The ways in which this girl’s stress manifests itself in her life are realistic and relatable. There is this fine line between reality and horror that is balanced very delicately and successfully.

Incorporated into the plot is this series of twists that keep the story moving forward rather than relying on people doing incredibly stupid things to move the action along like so many other horror movies.  The college setting works so well here because it is the combination of partying, alcohol, low adult supervision and fearless young adulthood that fuel the action. And by the way, THIS is how sex and sexuality should be melded into a film.

Although gory at times (we are talking about a movie about cannibalism here, so yes, there is gore), the horror remains relatively subtle throughout the story.  I’ve been reading articles about how gory Raw is, like this one, but I didn’t find it to be nearly as repulsive or disgusting as anticipated.  Please note that according to IMDB when the film was shown in Sweden, over 30 people left the cinema and two of those fainted. Depending on how squeamish you are, be careful.  I enjoyed the level of gore and that even in the effects department this movie does not rely on the same gimmicks we’ve seen in other horror movies.  The more I write about this movie the more I like it.

I wanted some different things to happen with the story that didn’t happen and I don’t write short horror stories, but I can definitely see Raw being used as a template for more stories about cannibalism.  (I cannot believe I just wrote that – much less, thought it – but there it is!)  I mean… Ms. Ducournau could have easily written about vampires or zombies, but you kind of have to admit, the cannibalism angle brings something clever and fresh to the party.

One problem with Raw is that there is one scene where I missed a couple of screens of text because the words blended into the film.  (I read English subtitles so slowly you wouldn’t believe English is my first language.  I just like to make certain I am reading what’s on the screen correctly.)  When I cannot see the subtitle because there is something the same color as the letters in the background it becomes rather frustrating.  Other than that there isn’t one bad thing I can think of to say about this movie.

Raw earned 9 out of 10 bloops.  I won’t go so far as to call it a masterpiece but it is fine work. Honestly, when I started writing this review I was going to give it 7 out of 10 bloops, but after thinking it through this really is a great little piece of horror.  It is an excellent movie, and a must see if you are a horror fan.  In New York City you can only catch it at the Angelika as of now.  I’m not certain whether or if it is scheduled to go into wide release.