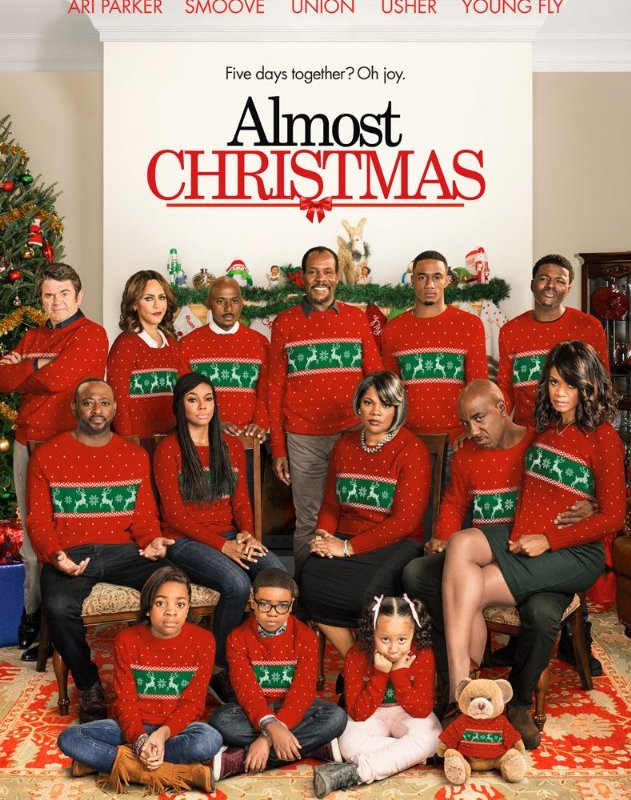 Honestly, before seeing Almost Christmas I had a lot of mind clearing to do because I thought it would be so similar to Soul Food or This Christmas or any other movie featuring a predominantly black cast involving family, food, church, music and dancing.  Oh, and somebody’s husband is going to cheat on them, for certain.  Like, yes Hollywood, black people do those things, but we also do much more.  Geez!  I thought, “Please don’t tell me this is going to be the same movie that I have already seen with some different black people in it.”  It isn’t.

All those things do occur in Almost Christmas, starring a whole lot of black people (LOL! Too many to name), but it is definitely worth a watch as it sets itself apart from those other films in a number of ways.

First, there is a theme of adults learning from children. One would hope that the younger, tech driven youth who have access to every bit of information known to man at their fingertips might be more knowledgeable than those who came before them about all areas in life.  These kids are, and they prove it every time you hear from them.  They constantly keep their phones at the ready to catch anything post-worthy, but also manage to stay engaged with each other and the older members of their family.  They are adorable as well.

Secondly, the sisters and brothers in the family have believable conflict and rivalry among them; things that if they don’t go on in your own family, you know a family where it does or it might go on. From your siblings judging your spouse or your life choices, or whatever, Almost Christmas shows relationships in stages ranging from being able to tolerate a relative you don’t particularly get along with to being all the way on the outs with them.  When you fight with a relative they know a lot about you and have the power to say some hurtful things that can wound deeply.  You can’t take those things back once they are put out there, but sometimes there are ways to work past it.  Not with me of course, but sometimes, some people can get past it.  I’m too much of a Scorpio to allow anyone the opportunity to hurt my feelings twice, but I’m a work in progress.  Pray for me.

Thirdly, Almost Christmas shows how individualized the grieving process can be from person to person. Avoidance of the grief and the events surrounding it altogether, dwelling on the loss, regrets of what wasn’t done while the loved one you lost was here, diverting yourself from thinking about the grief by preoccupying yourself with anything else; all these processes that we use to cope with grief were displayed.  Some of us grieve more openly and some internalize it without asking for help, until the grief consumes us.  It was good to see mourning and grief touched upon in such detail, because dealing with death is as “real” an issue as anyone ever has to face and it is an important subject to talk about.

Almost Christmas reminds us that Mo’Nique is one helluva good actress.  I’m sure my nieces and nephews will agree, she reminded me very much of myself in a humorous way here; that aunt who knows a lot, thinks she knows everything, with the foul mouth, the big heart, a wig, a drink in her hand and some jokes.  My family doesn’t get together on holidays like that anymore unfortunately, and there are reasons why; but this movie made me almost miss those days.  Almost.

This movie takes you on an emotional roller coaster (or maybe I was just feeling weepy today, but I enjoyed it) where you will tear up, then laugh out loud and then shed a tear. The opening scene is absolutely fantastic and sets the tone for the good time that is ahead.

Okay, now for the unpleasant part. What I didn’t like.  There is one scene that is sooooo corny I wanted to screeeeeeam!  I mean I absolutely hated it.  You will know it when you see it.  Trust me when I tell you that  you will know it…  There were some formulaic elements present, such as the church scene – a mandatory staple, obviously, for any and all large, black families.  I’ll allow it, because the movie is based on Christmas, but aside from adding a gospel song to the soundtrack, there was no real reason for a church to be the setting used.  Also, at an hour and 52 minutes, the movie is a bit too long.  That super corny scene is what could have been cut out altogether and please don’t accuse me of trying to take the “Christ” out of “Christmas,” but the lines spoken during the church scene could have been incorporated elsewhere.

Almost Christmas earned 7.5 out of 10 bloops. Could have been an 8, but that scene!  Uuuugh!  It is a feel-good holiday movie worth seeing.  I would say it is a family film, but there’s a bit of cussing and a wee bit of vulgarity you might not want the little ones to hear – or you might not want to hear it yourself.  You won’t be bent over holding your sides with laughter, but there are some funny moments.  It strikes a nice balance between humorous and dramatic without getting too corny (except for that scene!), or sappy.  It’s a nice, light weekend movie I think you will enjoy.