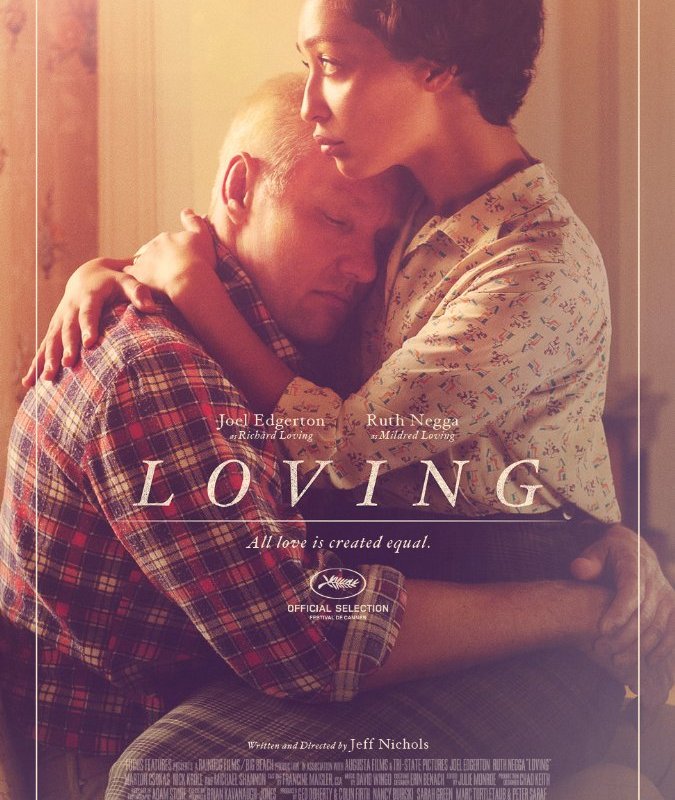 Loving, starring Ruth Negga and Joel Edgerton, is based on the true story of Richard and Mildred “Bean” Loving’s fight to have their 1958 interracial marriage legalized in Virginia, and how that fight led to the 1967 Supreme Court decision that, simply put, made interracial marriages legal in all 50 states.

I enjoyed the portrayal of Mrs. Loving as this quiet, meek, figure who was thrust into this fight for her civil and human rights. She was not a crusading, organizing, protesting civil rights figure, but her humble and quiet demeanor is what helped draw her husband in and got him to go along with her decision to take their battle through the courts.  The Lovings were not typical revolutionaries. There is no big rebellion or riot or protest scene involved here.  And most surprisingly, the Lovings made it through this without being killed by some racist police officer and/or the Ku Klux Klan or some other misguided, “interested party.”  Mrs. Loving just wanted to live in their hometown near their families, with her husband, in peace, without fear of persecution.  She wanted to find a way to right the injustice her family had endured, and do what she could to ensure no one else went through what they went through.

The acting in this movie is palpably strong. You will feel as though Negga and Edgerton actually know, love and care for each other as the Lovings.  The likeness of the actors to the real life Mr. and Mrs. Loving is striking.  Negga is powerful in her humility and grace.  And those eyes!  You will drown in this woman’s eyes.  You will strongly feel her growing depression over her circumstances, and it is revealed in such a charmingly restrained way.  Equally will you feel her mood elevate as things begin to go her way.  Edgerton as Mr. Loving conveys all the inward turmoil of a man who is powerless to make his wife happy.  He just wants to go to work, protect and provide for his family and live in peace.

There is a nice mix of up-and-coming actors and character actors whose names you may not know but whose faces you will remember if you check their acting credits. You will find there are a lot of actors you will want to see more from including Sharon Blackwood, Christopher Mann and many more.

Written and directed by Jeff Nichols, there is much suspense and surprise in all the right places here.  You fear for the Loving’s lives, just as they do.  The use of the language that was actually used in court documents to describe people who were other-than-white in those days is smart.

What I didn’t like about this movie was that I was uncertain about the timetable. Suppose I was someone who knew nothing about the story?  How long was it between the marriage and the Supreme Court ruling?  Even though there were strong indicators, I would have liked to have some dates on the screen to clearly show that this battle took many years and what was happening with this couple in the years in between.  I would like to have seen how Richard and Mildred met because it would have helped put a gage on how young they were when all of this was happening, but the story begins a bit later.  Also, in the effort to portray Mr. and Mrs. Loving as these two calm and internalizing souls, the movie lacked a bit of “oomph,” shall we say.  It is generally sort of a low energy film, which is not necessarily a bad thing; but Mrs. Loving in particular could have conveyed more passion during the more traumatic scenes.

The unfortunate casting of Nick Kroll as attorney Bernie Cohen was difficult for me to watch at times.  He is such a widely known comedian that his cute, silly face makes you anticipate a joke that never arrives in a movie that is far too serious for him to be in.  He wasn’t terrible, but he was distracting in this role, in my opinion.  Also, I was looking forward to a courtroom scene of some sort that contained some real drama that never quite came to fruition.

Loving earned 7.5 out of 10 bloops. It is a good movie, worth seeing if the subject interests you.  It is an important part of American history that should not be forgotten in a story that needs to be told.  The acting is great, overall.  If you don’t go to support it in theaters I recommend you stream it when it becomes available.