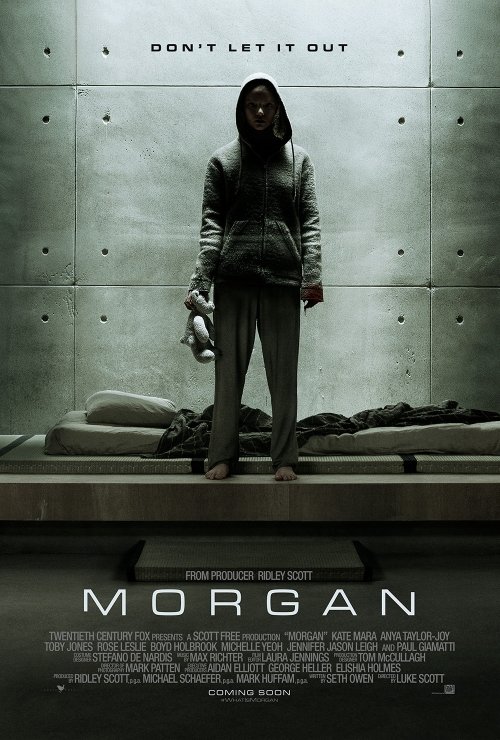 Morgan, starring Kate Mara (as corporate risk-management consultant, Lee Weathers) and Anya Taylor-Joy (as government artificial intelligence experiment, Morgan), is the story of a top-secret government attempt at perfecting AI, gone wrong.  Several scientists have been sequestered for years with an AI project intended to improve upon earlier prototypes.  After a violent incident, Lee is sent to assess the situation and decide what the next steps should be for Morgan.

If you think it would be difficult to eat an animal, such as a chicken, or a pig, after naming it and treating it as a pet, imagine having to possibly exterminate a science project that is so lifelike you haven’t bothered using its code name for years. It is just Morgan.  This is what these scientists who have lived with Morgan since its creation must decide.  Do we protect Morgan at all cost, or allow its fate to be left in the hands of a stranger?  We learn in research ethics 101 that this “closeness” these scientist have with Morgan is an absolute no-no.  How can objective data be gathered when the scientists are so close to the subject?  It cannot.

I enjoyed this movie, not only because it emphasized how human emotion can be a hindrance as it relates to science and the emphasis on these scientists and their various reactions to this crisis, but also because it reminded me of how people now humanize pets/animals. When I was growing up, a pet was a pet.  The fish died, you flushed it down the toilet; cat acted up, kid allergic to it, you took it somewhere and “lost” it; dog or cat sick, you put it down; dog died, you bury it in the back yard.  There was no medication, insurance or funerals for cats and dogs like there is now.  There was no veterinarian reptile specialist (oh yes they do exist!) to treat your sick or injured turtle.  Pets had no clothes or strollers or boots or hats.  Pets were no less loved by their families then, but there was a much clearer demarcation between humans and the pets they kept.  This is just my personal observation and opinion, and it is neither a good thing nor a bad thing, a right thing or a wrong thing, it just is – but the human/pet relationship seemed to consist of much less dependence on the human end back then.  Your pet was your pet.  Period.

Maybe those were simpler, more ignorant times. Most people now believe that animals have souls where this was not even a question that was thought about then in regard to a pet.  We have always known animals have thoughts and feelings and can express love, gratitude, grief, etc.  Some even believe that animals are eligible to enter animal or even human heaven – yet another question that wasn’t generally pondered in the past.  There has been so much “enlightenment” about pets and animals in recent years (if only we could be so enlightened regarding one another).  But no matter how enlightened we become, pets are not, nor will they ever be, human.  And whether you are a pet owner of the past or a modern day “pet parent,” none of this negates how attached a human can become to their dog or cat or bird, or whatever type of pet they choose.  This is what reminded me of Morgan – or rather – what Morgan brought to mind for me.  Morgan is like the dog that attacked you and took several huge chunks out, but you cannot put it down because you love it too much, and you believe “she really is a good dog.”  Similarly to how many people would feel about their pets, Morgan is “humanoid” or almost like a human, but she is not human, and she never will be.

This movie is better than it appears at first look. The subject matter is interesting and somewhat original as it deals thoroughly with the many complex human emotions surrounding a man-made, artificially human science project.  It shows how human emotions can put one at a disadvantage vs. the advantages a lack of emotion can give one in the ability to make “cold” but calculated decision.  The acting is solid with not one complaint.  The tone of the movie feels “flat” at times, but that, I believe, is purposeful. And it works mostly, because Morgan’s affect is flat, as she has the capacity to mimic human emotion, but lacks the capacity to really “feel.”  Or does she?

Morgan earned 8.0 out of 10 bloops. It is a good movie, worth seeing if you are at all interested in sci-fi and/or AI.  I am not particularly into AI, but I liked this.  It also contains some well-choreographed action scenes.  There is some graphic violence which is why the movie is rated R, but it is not “overly gory” in my opinion.  They could have gone much further on the gore but did not and I appreciate that.  No need in turning something interesting into a bloody gore-fest.  It would have been unnecessary.