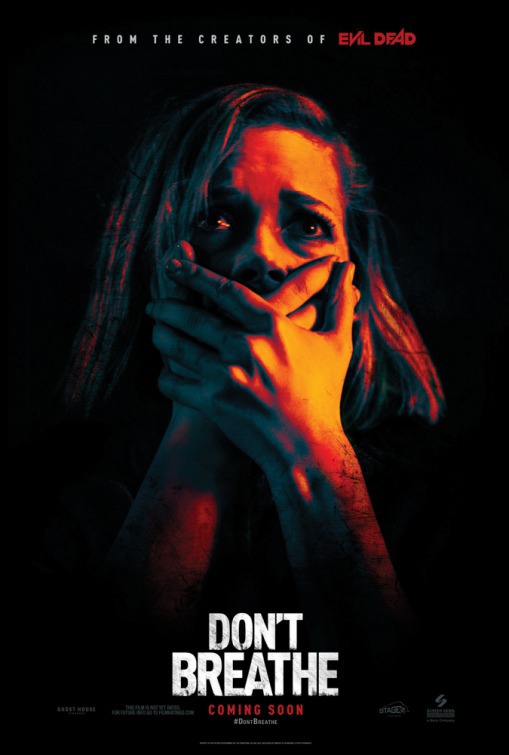 Starring Stephen Lang and Jane Levy, Don’t Breathe is written and directed by first-time feature film director Fede Alvarez . It is the story of one very bad decision turning into a nightmare. The kind of nightmare from which there seems to be no escape, as it goes on and on and on…

From the beginning of the movie, Don’t Breathe sets us up for the suspense that is forthcoming. The premise feels original (even though we’ve seen elements of it before in movies like Panic Room, The Fear Inside and Wait Until Dark, just to name a few) and the originality of its execution will keep you engaged, for the most part.

With no particular “good guy” to root for in this movie, the dynamic of who the “bad guy” is changes throughout the course of the story. It is this back and forth that provides Don’t Breathe’s originality and “twists” and makes this movie suspenseful and worth watching.  This movie isn’t so much of a “horror” movie as it is a suspense thriller, where you, at least at one point, may find yourself holding your own breath with the characters and saying aloud, “Don’t breathe!” – perhaps with an added expletive for emphasis (or maybe that is just me).  This is the type of movie that will appeal to you even if you don’t care for “horror” flicks, because it is not a horror flick in the truest sense. There are no supernatural occurrences, no poltergeists, no demons, spirits, zombies, witches or warlocks.  There is not a lot of blood or gore.  What we have here is a lot of suspense and a lot of fast paced action.

The acting is quite good; better than I have seen in an American-made horror flick in a long, long time. Jane Levy’s eyes are so expressive.  You wouldn’t think she would be able to open them as wide as she does in one horrifying scene, but she pulls it off and makes it believable.  Stephen Lang is brilliant in his role, playing the blind man.  He is a soldier through and through whose other senses are heightened to the point where he is animalistic and this makes him terrifying to watch.

This movie is not without problems unfortunately. As in most “horror” films, there are moments when you wish you could literally just reach out and slap, or push, or yell directly at a character.  “Why are you still standing there!”  “Run stupid!”  “There is really nothing to discuss.  Just get the hell outta there!”  As irritating as these moments can be, here they provide the bridges to elongating the action and suspense.  The problem is, these moments are also moments when you come “outside” of the movie and are back in the theater shaking your head at the screen following scenes where you were just totally into the action.

There is something “lame” about the beginning of the movie as the premise is set up. It sounds like too many set ups heard before in other horror movies where young people tell the tale of so-and-so who died and the ghost that haunts the schoolyard, or whatever.  If you can get past that, and trust me, you can, you will not be disappointed once the action begins.

A couple of events in the end went “off the rails,” making it feel as though Alvarez lost control of the story and the story lost a bit of its sophistication and maturity. I can’t explain it further without telling you what happens.  Watch it and see for yourself.  You will know exactly what I mean when you see it.

All these issues aside, Don’t Breathe earned 7.5 out of 10 bloops. It is a good movie worth seeing based on the originality brought to a not so new premise, strong acting, fast paced action and suspense.  The story is entertaining and the length of the movie is just about right.  Additionally, although not mentioned earlier, the camerawork is exceptional during many scenes.  As Alvarez states in his “thank you” message before the film starts, it is a film that merits watching in a theater amongst a group of strangers.  Wait until the lights go out for this one.