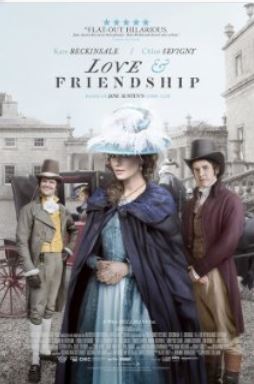 Set in the 1790’s, following the death of her husband, Lady Susan returns to her brother’s home in search of a new benefactor (husband) for herself and/or her daughter in an attempt to keep herself in the lifestyle to which she has become accustomed and keep her good name from being ruined.  She is generally known as a great lady, but is attempting to keep the secret that she is in debt and surrounded by scandal so that she can bag another man with some money to take care of her.

I have never read the original works, so I have no idea how this movie is similar to or different from the books.  Love & Friendship makes an attempt at cute, campy, tongue-in-cheek and audacious humor, which mostly fell flat in my opinion.

The failure starts right in the beginning of the film when we are introduced to each character during a musical interlude where each character appears in an “action” scene with their name written on the screen and some blurb about who the character is or how they fit into the story. This took up quite a bit of unnecessary time.  I believe it was meant to be entertaining and/or funny somehow, but I did not care for it.  It felt like a device used to drag the time of the movie out.

The other failure lies in the writing for the character, Lady Susan.  Don’t get me wrong, Kate Beckinsale does a fantastic job with this character as it is written.  But unless the character is a witch, the devil or a monster, even the most ridiculously obliviously self-absorbed human character should have a glimmer of at least one congenial quality; be endearing, humble, charitable, humorous, child-like, charismatic, dopey – something.  Anything!  I do understand that the character is supposed to be a straight up jerk, but it was too much “jerkiness” for me.  Lady Susan was a colossal bitch to everyone she could use and discard to attain whatever devious, self-serving goal she set for herself.  Somewhere around the middle of this movie I wanted her to be run over by a horse and buggy or something – and for the film to just be finished.  That’s how strongly Lady Susan got on my nerves.  She used every single person around her, including her deceased husband, her suitors, her brother, his wife and her parents, her own daughter; no one was off limits.  No lie too big to justify.  I’m sure that I missed the joke of it all and that her disgusting attitude was the joke, but I found it unfunny and off-putting.  I cannot imagine a person being this openly mean-spirited.  Maybe I was just having an off day myself.

I thought, maybe she reminded me of someone I know, or I saw something of myself in this character that really got under my skin. Why else would I dislike her so strongly? Then I figured it out.  I don’t like nasty people.  Period.  Also, by being so openly vindictive, the viewer is forced to believe that everyone around her was incapable of seeing through her façade, did not realize what a vile person she was, and/or was just plain ole stupid, and I just could not.  I would imagine this character playing much better in the books.  Every line that came out of her mouth was blunt, acidic, acerbic, and mean.  This was funny at points, but got old after a short while for me.  This character is the type that if you could punch her in the face, you would.  And if you couldn’t punch her in the face, you would take great pleasure in seeing someone else pop her right in the mouth.  I don’t think I’ve ever seen a character I’ve disliked more.  Even Harvey Keitel as The Bad Lieutenant was more likable than this broad.  Susan is arrogant, wicked, mean, insensitive, cold and manipulative.

This overbearing nastiness that I found so grating was unfortunate, because the other characters had well written parts that were well acted. Tom Bennet as Sir James Martin reminded me of a young Nathan Lane (can you believe The Birdcage came out 20 years ago!) and I enjoyed his portrayal of a rich, clueless, lovable, idiot, very much, as he provided much needed balance to the dark severity of Lady Susan.  Chloe Sivigney did an excellent job as Lady Susan’s best and only “friend” and co-conspirator.  The other supporting actors also performed well.  The costumes and decor were beautiful.

I give Love & Friendship six out of 10 “bloops.” It’s not bad, but could have been much better.  I was looking forward to this one and left feeling disappointed.  You might like it a bit more than I did if you don’t take Susan too seriously.  It is, after all, supposed to be a comedy.