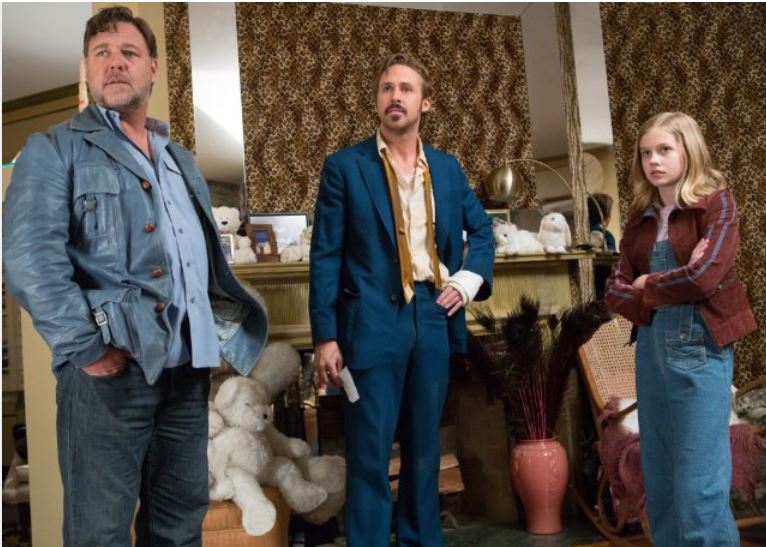 The Nice Guys features Russell Crowe (as Jackson Healy) and Ryan Gossling (as Holland March) as two 1970’s “nice guys” (along with some not-so-nice guys) in a race to find a missing girl.  It is a buddy movie featuring Jackson, Holland and Holland’s teenaged daughter, Holly (played by Angourie Rice) as a trio of sometimes tough, sometimes bumbling, sometimes drunk (not the kid), but consistently funny detectives.

The film is full of action, mystery, suspense, adventure and fun. There is a good blend of comedy and tension to hold your interest.  Those who remember the music, style and “feel” of the 70’s will enjoy this trip down memory lane through the soundtrack, décor and clothing.

I found it entertaining to see the comedic side of a plumped-up Crowe (I had to remind myself, it has been 16 years since he played Maximus in Gladiator) and Gossling.  Gossling, in particular, works for and earns a lot of laughs through physical comedy and a hilarious homage to the late, great Lou Costello.

Shane Black co-wrote and directed. You may not think you know who he is, but let me tell you, you do.  He wrote and/or co-wrote famous buddy films Lethal Weapon (1987), Lethal Weapon 2 (1987), The Last Boy Scout (1991), and The Long Kiss Good Night (1996), etc.  He starred in Predator (1987) as Hawkins, and is charged with writing the highly anticipated fourth installment of the Predator franchise, which is slated for release in 2018.  I’m glad I didn’t know about any of this before seeing the film because my expectations would have been too high to be met.  But I am telling you, because I believe he has struck upon another endearing combination here.

The Nice Guys delivers on mishaps, explosions, inappropriate jokes and action (And boobs. There are a few boobs – as in breasts – shown, so if you don’t care for nudity, this would probably not be the movie for you).  Throughout the movie the audience “oohed” and “aahed” at the stunts, laughed at the jokes, learned about these new characters and became invested in their pursuits.  It’s the type of movie that I think almost anyone would enjoy, but some will enjoy it more than others, based on their personal preferences, of course.

Thank you for reading. You can scroll down, enter your email address, and never miss a review!

Kingsman: The Golden Circle
Mother!
It
Good Time
Atomic Blonde
Dunkirk
Girls Trip
Spider-Man: Homecoming
The Big Sick
Baby Driver
All Eyez on Me
It Comes at Night
The Wedding Plan
Wonder Woman
Everything, everything
King Arthur: Legend of the Sword
Raw
Kong: Skull Island
Logan
The Girl with All the Gifts
A Cure for Wellness
Get Out
Hidden Figures
Fences
Moonlight
Hell or High Water
Loving
La La Land
Lion
Manchester by the Sea
Arrival
Hacksaw Ridge
Nocturnal Animals
Captain Fantastic
Elle
Jackie
I Am Not Your Negro